Lisa’s Lyme Disease journey began in October 2000 when a nauseating dizziness sent her on a journey through twenty plus doctors as her health spiraled out of control. Diagnosis ranged from Labyrinthitis, rheumatoid arthritis, swollen jugular vein, autoimmune inner ear disease, Lupus, Multiple Sclerosis, and a few interesting and strange ones.

Her body seemed to be in a self-destruct mode with kidney infections, kidney stones, hearing problems, constant use of steroids to try and stop the unending dizziness, tumors, cysts covering her liver and kidneys, numbness, headaches, bleeding problems, eye problems, nerve damage, and the list went on and on as surgery and hospitalizations were required.

Six years later, she was diagnosed with Lyme disease. Once diagnosed, Lisa began treatment in January 2006 with IV antibiotics for thirty days. After that point, Lisa assumed she would be well and continued ignoring symptoms. 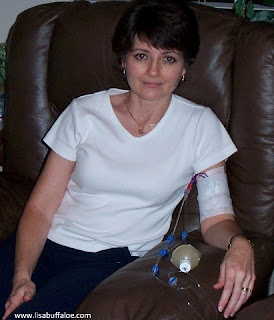 Fortunately, Lisa met Natalie Nichols who referred her to a Lyme disease specialist. Further treatments were started with continual oral antibiotics and supplements. When Lisa’s health didn’t improve she was switched to IV antibiotics in April, 2007 using a picc line (Peripherally Inserted Central Catheter threaded through a vein in the arm up into a large vein near the heart.)

A blood infection forced the removal of her line the last week of August 2007. A temporary IV line was used to fight the infection until September, 2007.

Oral antibiotics and an anti-malaria drug were used until January 2008. 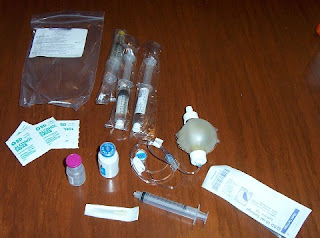 A brief respite from medications caused a downturn in health, and antibiotics were resumed mid-March of 2008.

Other than fatigue and deteriorating neck discs, 2009 was relatively quiet health-wise. Another bleeding problem surfaced in March 2010, and an ultrasound and mammogram warranted the need for her seventh surgery.

A month after surgery, symptoms remained reasonably quiet. Then her health again started to steadily decline. Fatigue built as every joint and bone hurt. Antibiotics were resumed on a temporary basis.Please read about Lisa’s healing in 2011 … Faith To Believe

Guideposts Magazine, A Time of Renewal

The information below is compiled through various sites…

Lyme disease is found in many countries worldwide, and has been reported in 49 states in the United States. While a “bulls-eye” rash is diagnostic for Lyme disease, the types of rashes vary greatly. Further, a significant number of patients do not recall any rash or tick-bite.

When the initial bacterial infection occurs after a tick bite, people may develop a rash and experience a flu-like illness. Often the rash is a red ring resembling a bulls-eye, but occasionally the rash may be red all the way across. The key is whether the rash enlarges or gets bigger, not if it is a red ring or solid red.

Symptoms can appear quickly or develop over time. Since Lyme is a multi-system disease, the list of symptoms is long, and it is common to see symptoms affecting multiple systems. Early in the illness Lyme disease can be confused with the flu, but as the disease progresses it can lead to cardiac, musculoskeletal, neurological, and/or other system involvement.

According to the International Lyme and Associated Diseases Society (ILADS), “Lyme disease is the latest great imitator and should be considered in the differential diagnosis of MS, ALS, seizure and other neurological conditions, as well as arthritis, CFS, Gulf war syndrome, ADHD, hypochondriasis, fibromyalgia, somatization disorder and patients with various difficult-to-diagnose multi-system syndromes.” Not only can Lyme disease be incorrectly diagnosed as other conditions, it can also occur concurrently with other conditions or be diagnosed incorrectly.

Lyme disease is treated with antibiotics, either orally or intravenously. Prompt and thorough treatment early in the illness is the most effective method for preventing a persistent, disabling condition. Patients with chronic Lyme disease often experience severe headaches, fatigue, pain, insomnia, and memory problems.

Chronic Lyme disease can render people completely disabled. There is no known cure for chronic Lyme disease, and its treatment is surrounded by much controversy. However, many patients find improvements when treated long term, either for Lyme disease bacterial infection and/or for the presence of co-infection.Lyme disease (LD) is a multi-system bacterial infection caused by the spirochete Borrelia burgdoferi (Bb). The causative agent, Borrelia burgdorferi, is a type of spirochete. Spirochetes are long, thin, spiral-shaped bacteria. The bacterium is able to move around the body through the bloodstream and between tissue. It can also invade tissue, replicate, and leave the cell-destroying the cell as it emerges. Sometimes, as the bacterium emerges, the cell wall collapses around the bacterium, forming a “cloaking device”. This action may aid the bacteria’s ability to hide from the immune system response. Immune difficulties are further complicated by the fact that spirochete can constantly keep changing genetic information expressed in its surface proteins. Just as viruses change from year to year, we know Lyme bacteria mutates. There are a number of organisms that can shift their surface protein in a matter of hours and that is how they evade detection and patients test negative. These organisms attach themselves to proteins and conceal themselves– creating a cloaking mechanism that defies detection. This allows them to get where they want to go– the nervous system. Once they are inside a cell, the immune system can’t see them.Pictures and slides showing bacteria transforming into cysts, spawning and starting the cycle again.
Borreliosis patients with a chronic infection most commonly have pain, tiredness, brain or thinking problems, blurry vision and neurological (nerve) problems. Borreliosis can cause any symptom and any disease. In addition to other symptoms, Borreliosis patients usually also have hypercoagulation (thrombophilia), endocrinopathies (hormone deficiencies), toxic metal elevations, deficiencies of essential amino acids and essential fatty acids, and also vitamin and mineral deficiencies. Borreliosis patients are usually low in iodine, have allergies, dead infected bone (osteonecrosis) in the jaw, have neurotransmitter deficiencies, and may have chemical sensitivities.

Pain is the number one problem for most patients with Borreliosis. Any part of the body can hurt, including the head, neck, eyes, ears, jaw, arms, hands, chest, abdomen, back, legs, feet, muscles and joints. This pain is sometimes worse than pain caused by surgery. Morphine may not help.

Tiredness or fatigue is the second most common symptom of Borreliosis. If you divided the pain symptoms into specific categories such as headache or joint pain, then fatigue would become the number one symptom. This tiredness has often been misdiagnosed as chronic fatigue syndrome. Fatigue can be so severe that the fatigue is described as complete exhaustion. Many are so tired that they lose their jobs and cannot help at home. They may also attempt a minor physical activity like walking to the mailbox or taking out the trash and become so tired that they have to go to bed.

Blurry vision is the fourth most common symptom in borreliosis, but that is with combining all of the various pains together and all of the brain or thinking problems together. The bacteria can inflame any part of the eye (causing conjunctivitis, iritis, uveitis, retinitis and optic neuritis), so having blurry vision as a common symptom is not surprising.

Finally, there are the neurological symptoms. Neurological borreliosis is also known as neuroborreliosis. Patients may experience numbness, tingling, burning, twitching, jerking, and muscle weakness. In addition, they may have seizures, and multiple sclerosis, Parkinsons, amyotrophic lateral sclerosis (ALS or Lou Gehrig disease) encephalitis, meningitis, stroke and dementia. As one neurologist who specializes in borreliosis put it, “The chapter on neurological Lyme disease is still being written.

In addition to the above symptoms, there are “red flags.” These include memory loss, twitching around the eyes, Bell’s palsy (in which half of the face droops), tinnitus (which is ringing or buzzing in the ears), symptoms that affect one side of the body more than the other, symptoms that are worse when a patient first gets out of bed or that are worse in the winter.”

Documentary and videos on Lyme Disease

“Under Our Skin, an infectious film about microbes, money and medicine.

“One of the most controversial illnesses in the history of medicine, Lyme disease may be the fastest growing infectious disease in the United States. Yet each year thousands are misdiagnosed – many of them told that their symptoms are “all in their head.” This upcoming documentary investigates the shocking human, medical, and political dimensions of Lyme disease, an emerging epidemic destroying countless numbers of lives. A case study of the dangers of the confluence of money and medicine, the film brings into focus a haunting picture of our healthcare system and its inability to cope with a biological terror under our skin.” http://www.underourskin.com/

Singer/songwriter Lisa Bevill suffers from Lyme Disease, please link to her song and video, “When the Healing Comes” https://youtu.be/Rua0MGxFW0k

Natalie Nichols is a dear friend of mine who has Lyme disease. Please view her video and read her amazing story….http://www.shadesofgrace.org/media-center/

The Lyme Disease Network is a non-profit foundation dedicated to public education of the prevention and treatment of Lyme disease and other tick-borne illnesses. www.lymenet.org

Brandilyn Collins has established a blog on Lyme Disease and those who suffer with the illness…. http://lyme-overtheedge.blogspot.com/

Rest Ministries is a wonderful source of hope for those with chronic illness…http://restministries.com/

More Medical reports, slides, and information regarding Lyme can be found at http://www.lymeinfo.net/lymefiles.html

A suspense novel based on Lyme disease and the “Lyme Wars”

Torn from the front lines of medical debate and the author’s own experience with Lyme Disease, Over the Edge is riveting fiction, full of twists and turns—and powerful truths about today’s medical field.
—————————————————————————–
The information on Lyme disease contained on this page is not intended to diagnose or treat any disease, is for informational purposes only, and should not, in any way, be taken as medical advice. Please consult a licensed health care practitioner for all your health care needs.