Out of left field a thought came and blindsided my emotions. Words said by someone in the past replayed in my mind entangling me in a web of anger and hurt.

Fortunately, I realized I have a choice. I could think about, whine about, and get mad about what they did, or I could cut the chains that tangle my emotions. Jesus has given a key to freedom, and forgiveness is the ax that cuts us free. As I forgave that person, I could feel the chains that tied me to that person, and the negative thoughts and emotions, lose their hold, and I floated free. The weight released and I felt light as a feather. The person remained chained to their sin, but I was free.

Jesus tells us, “If you forgive those who sin against you, your heavenly Father will forgive you. But if you refuse to forgive others, your Father will not forgive your sins” (Matthew 6:14-15, NLT). When we forgive, forgiveness leads to our freedom and our forgiveness. Satan wants us to think forgiveness lets the other person off the hook, but the only one unhooked is the one who forgives.

Feeling chained? Cut the chain by forgiving so you can fly free. 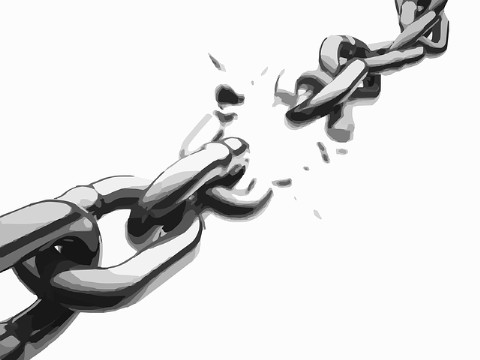 “When we refuse to forgive, we bind ourselves to what we hate. … Forgiveness means taking someone off your hook and placing him or her on God’s hook.” ~ Sharon Jaynes

“It is impossible to keep people jailed in unforgiveness without being enslaved to it ourselves.” ~ Joanna Weaver

“Nurse resentment and you are never released… It’s only forgiveness that gives a future… Because it’s always in the forgiving that wrongs begin to right.” ~ Ann Voskamp

“It is not on our forgiveness any more than on our goodness that the world’s healing hinges, but His. When He tells us to love our enemies, He gives, along with the command, the love itself.” ~ Corrie Ten Boom

Adapted from Present in His Presence by Lisa Buffaloe  https://amzn.to/300Vx3x